My Learnings Through Theatre and Speech 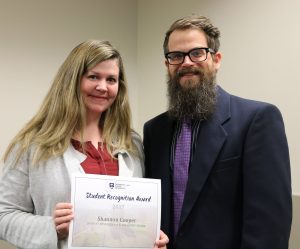 Myself and Wes Eccleston. He is an amazing professor who really challenged me to look beyond the script and to look at the world as a global citizen.

As I sprint into my fourth year at Thompson Rivers University I reflect on all of the classes I have taken. Through this reflection I realize that a lot of my courses are helping to shape me into a better global citizen by allowing me to gain global competency.  For example, in my second year theatre class, taught by Wesley Eccleston, I acted out a  scene from a play called, Playing For Time by Arthur Miller. It is a scene based on a true story of women in a concentration camp during the Holocaust. They have been allowed to form an orchestra and literally must play for time knowing that if they fail to play well, they will die. In order to get into the mind-set of the character I played, I had to research the Holocaust, research the orchestra, research Germany and Paris during the time the play was set and get to know the different cultures, religion and morals of different communities. I also had to learn how to speak with an accent because speaking with a Canadian accent would have made the scene and character less powerful. Without this preparation the character would have fallen flat and the story would have been lost. The purpose of theatre is to entertain. But more than that,  theatre is meant to educate. Since the dawn of time theatre has been an outlet to express relatable thoughts and feelings about world issues, family, sex, drugs, addiction, abuse, politics, mental health, war, religion, feminism, sexism, pollution and many other subjects that affect us as individuals and as a global community.  Without the study of theatre I would not have been able to cultivate the researching skills needed to go beyond the surface of what I was reading. 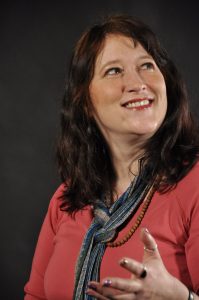 Heidi Verwey another incredible professor who really embraced the diversity in the classroom and created a global community.

Another class that was an asset for global competency was the Speech class taught by Heidi Verwey. The class was diverse with international students and every week we had to present something. Our first presentation was a speech. We did not have to write the speech, instead we had to pick a speech that had already been done and read it in our own way. The speeches that were presented were rich in content and a majority of them where originally by people whom I had never even heard of from all over the world. That is the beauty of being in a multicultural class, you learn things about the world in a new way. For example, a women in the class opted to do a speech by Malala Yousafzai, the woman who was attacked by the Taliban. She followed up the speech by talking about why she had chosen it and her own struggle as a woman from Africa. A man in the class opted to do Adam Goodes Australian of the year acceptance speech. The speech deals with racism and how people and communities need to work together combat it. He himself is Australian and felt that the speech is relevant in the Global Community.  These are just a few examples of the speeches that were done. Through the speeches I learned a lot about different world issues, solutions and opinions form people who actually live there. Each student presented a speech that spoke from their hearts resulting in us, or at least me, to listen with mine.

Through the theatre and speech classes  I was apart of a multicultural classroom that embraced the diversity of the class and created a stage for a global community. As an actor, public speaker and audience member,  I was in an intercultural environment, which allowed me to improve my empathy, tolerance, and awareness of different world issues, cultures and people.