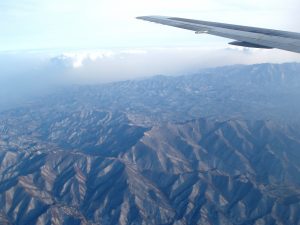 View from the Plane

The first time I went to China I was a little uneasy as I did not know what to expect. I packed my bags full of food that I thought I could not live without, candy, Kool-Aid and a variety of granola bars. I had been told by a fellow teacher to bring my favourite foods, as it would help me feel less homesick. Even though I had some experience with Chinese culture through multicultural days at school or with different people that I had met through my life, I had never ventured to a country where English was not the first language and the fact I did not speak a word of mandarin made me nervous. 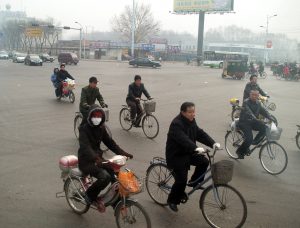 All my fears were laid to rest the second I popped off the plane and was electrified with the busy excitement within the Shanghai Pudong International Airport. This electricity continued as we took the two-hour bus ride to our final destination Haimen, Nantong, Jiangsu. The bus eased through the gridlock traffic while cars, bikes and scooters serenaded us with beeps, honks and chimes. We crossed beautifully constructed bridges over the Yangtze River and observed dozens of communities from rural to city until we finally pulled in front of our new home, at least for the next 4 weeks. 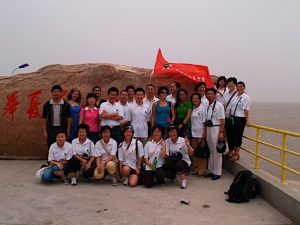 All of the teachers and camp leaders

The first few days in Haimen was a bit of a culture shock. I quickly learned that the rules of the road need not apply and if you want to cross the street you cross in groups like frogger, running from one line to the next and to beware of scooters! I also learned that the people in this small town, I use the word small loosely as small town in China was about 1 million people,  are lovely in every sense of the word. They welcomed me with open arms and were quick to help in any way that they could. I learned that even though there is a lot of poverty and that poverty can be generational, families help each other as much as they can be it working long hours selling things or child minding. I learned the importance of education. A lot of the children and teenagers felt immense pressure to succeed and had high expectations of what they could accomplish. This forced me to be a better teacher as I did not want to let them down. 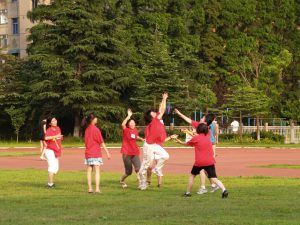 Something that I will never forget as long as I live was the different reactions from the students when they learned that I would be teaching them sports. A lot of them spoke about the fact that in their schools there was little time for basketball, volleyball or other sports that Canadian students get to learn. Instead they are more focused on the academic side of school. The students were also a little surprised that I, a woman, would be teaching them sports. That is not to say the students were sexist by any means, they had just never seen a woman teach sports nor play them other than on the television.  When I shot my first 3 pointer there were gasps followed by clapping. One little girl came up to me and said that she had always wanted to learn but did not know that girls could play.

Through out this teaching adventure I learned a lot about myself and my ideas of the world. I learned that I really did not know anything and that I had essentially been living in a bubble. This trip forced me, in the best way possible,  to re-evaluate who I was and to make slow changes in becoming someone better. I learned patience, empathy, how to communicate with verbal and non verbal cues and that I have much to learn about being a Global Citizen. But this was a wonderful start.