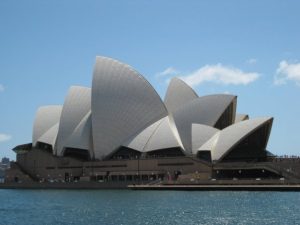 Being as my father is Australian and i have dual citizenship, I have had the opportunity to go to Australia on a couple of occasions. The first time I went was with McDonalds, believe it or not. They were holding a World conference in Sydney for all restaurant managers and I was one of the lucky ones who got to go. I attended may different conferences, got to see how McDonalds ran around the world and met hundreds of people.

The second time I went was in the winter of 2010. My second mom, as I call her, was visiting for Christmas and I made the decision to fly back with her to Sydney and stay for a couple of months.  She introduced me to the “Aussie way” complete with football games, cricket games, venturing through caves, lamb dinners and surfing. I also had the opportunity to stay on a farm , as mentioned in the About Me section, where I made friends with a frog, some cows and saved a baby Kangaroo’s, known as a Joey, life. Kangaroo’s in the country are known as a bit of a pest. They get into the paddocks and eat all the grass that is intended for the cows and sheep. Being as most of the inner country of Australia is in constant drought it is becoming harder and harder for farmers to make it. So one day I was asked to get into the ol’ pick up truck and drive around the farm, which I was more than happy to do. This was my cousins farm after all and I did not want them to think I was some silly city slicker. Little did I know the purpose of my drive was for him to shoot at the Kangaroo’s that were treating themselves on the grass. I was devastated about this as I did not see the Roo’s in the same light as they did. He told me that they often to not hit the Roo’s but it is more of a scare tactic. However there was one Roo who was injured and could not get away, that one did get shot and seconds later a Joey popped out.  I refused to let my cousin shoot the Joey, I know he could not understand my emotions about it but I had not grown up on a farm and to me animals are pets. So he spared the Joeys life and let him hop away. Thankfully the Joey was big enough to take care of itself so I like to think that he or she is still out there living it up, even if that is naive thinking. 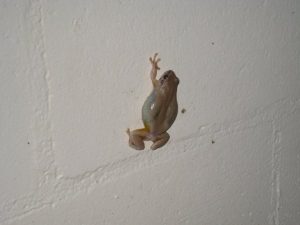 For the most part my time on the farm was amazing. It challenged me in many different ways as it was a life I had not experienced before. I made friends with a frog, learned how to shear sheep, catch Yabbies, shoot a rifle and take car of the cows and chickens. I also learned about the Native grasses and how Australia is setting up a program that reintroduces the native species of plants back into the land. This is because of the fact that there are many foreign species of plants, introduced by early settlers, that just do not have the ability to grow properly or are taking over the landscape. It is important to put the land back to it’s natural form in order to have sustainability in those drought areas both for plants and animals. 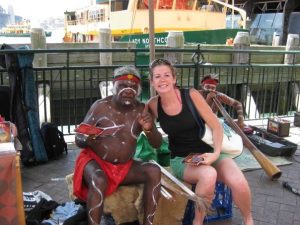 Another important part of my adventure in Australia was an old Aboriginal man that I met at a music festival. He showed me the art of circle breathing, something that I am still unable to master. This style of breathing is an important part of playing the didgeridoo as it allows you to have long notes without breathing breaks. He also talked to me about “Dreaming” which is a form of storytelling and what happened on his “Walkabout”. A Walkabout is a right of passage where a boy between the ages of 10 and 16 would go into the wilderness alone for 6 months and transition into a man. He told great stories about the stars, hunting and how his life has gone. He forced me to think about the changes I need in my life to make my life better so that I can help others.  He taught me how to listen with my heart, something that I am still learning each and every day.

All in all my trip to Australia was wonderful and I learned a lot. I am excited to go back with my son Brisbane this August and I hope to find that man again.